Starkey Hearing Technologies is a true American company with humble beginnings and has grown into a global leader in hearing aid manufacturing. In 1963, Harold Starkey opened Starkey Labs in Maple Plain, Minnesota. The following year, William F. Austin opened a retail business, Professional Hearing Aid Services, in South Dakota. In 1967, Austin moved this business into the basement of Harold Starkey’s home in Hopkins, Minnesota. Combining repair services with innovation and customer service led to the company we know as Starkey today.

As they look to the future, Starkey continues to strive to turn research into reality. With over 5,000 employees at 22 facilities, the company conducts business in more than 100 worldwide markets. They have developed a network of over 5,000 hearing care professionals with more than 100 current research and development projects in the works. Starkey’s award-winning research has resulted in 826 international patents to secure the intellectual property of the brand among the other competing hearing aid manufacturers. Starkey Hearing Technologies is much more than the hearing aids they produce. They are in the business of connecting people and changing lives. They believe that being able to hear the world and the people around us is as essential to the human experience as breathing. A world leader in manufacturing and delivery advanced hearing solutions, Starkey’s goal is to bring people together and to make lives richer by empowering individuals to reach their full potential in life.

A recent innovation from Starkey is the Livio AI, the first ever hearing aid to feature integrated sensors and artificial intelligence. The ability to track brain and body health redefines what a hearing aid can do. If you want to hear comfortably in challenging environments, the Livio AI delivers Hearing RealityTM to give you clarity in loud settings and comfort in quiet settings while emphasizing speech recognition across the board. The convenience of adjustments on the go is achieved through the ThriveTM app. If you want to lead a more healthy and active life, the Livio AI is the first hearing aid to help you track your progress toward health and wellness goals and benchmarks. Customizable tinnitus relief utilizes Advanced Multiflex Tinnitus Technology, which is adjustable through the ThriveTM app, to bring relief to those who suffer from ringing in their ears. All with the dependability that you have come to rely on from Starkey, the Livio AI meets all your hearing needs.

Starkey hearing aids are also known for the exceptional rechargeability of their batteries. The best-in-class rechargeable aids last 20% longer than other systems, are 30% smaller and 100% easier to use. The longest lasting charge delivers hours of superior hearing. The all-in-one charger holds enough charge to get your aids back to operation even on the go without plugging into the wall. All these features are available while the aids remain the smallest rechargeable hearing aids on the market. 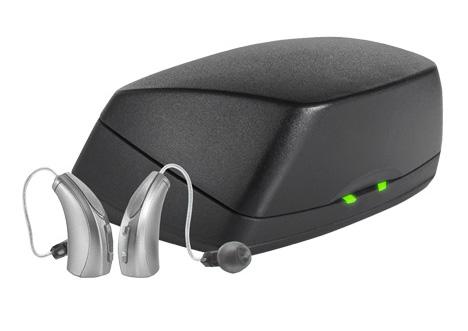